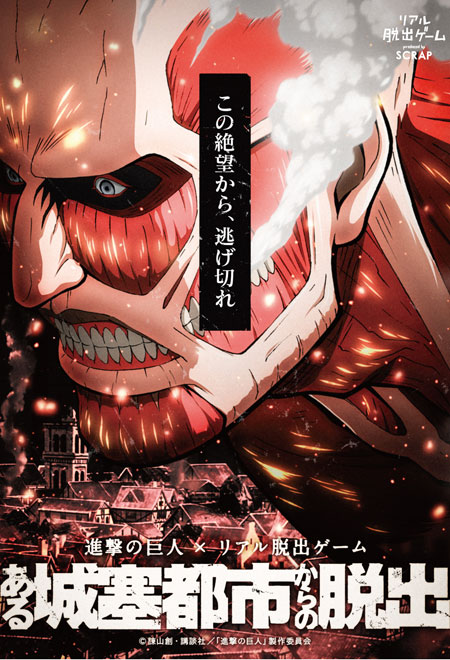 © Hajime Isayama / Kodansha / “Attack on Titan” Production Committee
The Attack on Titan: Real Escape Game, a hands-on entertainment event based on the popular manga “Attack on Titan” by Hajime Isayama (from the Manga Department of the Kyushu Designer Gakuin) will also be held in Fukuoka.
Attack on Titan, currently serialized in Kodansha’s Bessatsu Shōnen Magazine, portrays the courageous humans fighting in a world dominated by gigantic humanoid creatures known as Titans. This event is a hands-on game, where you will become trainee soldiers, solving a variety of puzzles, clearing the missions to continue towards the escape. The rule is you must clear it within the time limit of 60 minutes.
Beginning with the May event at Yokohama Stadium, it has become a huge event, travelling throughout the entire country.

《What is a real escape game?》

The “Escape Game”, which exploded in popularity after the 2004 release of the free internet game Crimson Room. A Real Escape Game follows the same format, only transferring the location of the adventurous, daring game into the real world.
They are held in a variety of locations; one room of a condominium, abandoned schools, abandoned hospitals as well as Tokyo Dome and Roppongi Hills.
Now, not only just in Japan, but also around the world in places like Shanghai, Taiwan, Singapore and San Francisco fans are being wrapped up in tides of enthusiasm.
Absorbing the interest of men and women of all ages it is a hands-on entertainment event which is attracting a huge amount of interest right now.