The 23rd “Focus on Asia International Film Festival Fukuoka ” will be held from September 13th to 23rd.
This year Canal City, Hakata will serve as main venue for the event, where films, musical performances, and a variety of other entertainments can be enjoyed together.

A total of 51 productions from 21 countries and regions throughout Asia are scheduled to be featured at the festival.
Many of these will be receiving their first screenings in Japan, and will be presented with both Japanese and English subtitles.
There are also expected to be guest appearances by many of the films’ directors and stars. 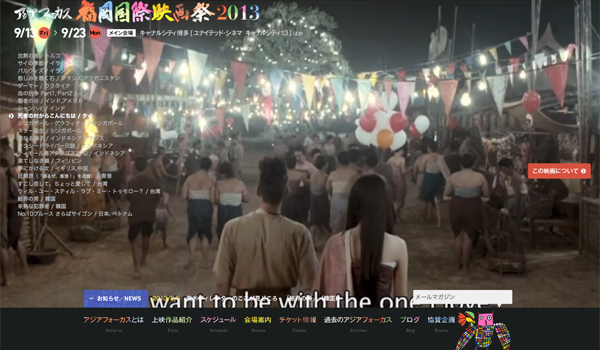 This year’s festival will also feature a number of new attractions, including Canal City, Hakata’s water-spanning “Red Carpet on the Water”, which all the festival guests will gather together to take a walk down.
Leading directors and famous film critics from all over Japan are also scheduled to attend.
For the most up-to-date information, be sure to check out the official website!
http://www.focus-on-asia.com/